The Land of the Dragon People

After an early start of our Bhutan motorcycle tour we arrived at the start point in Bagdogra, North East India, and got acquainted with our Royal Enfields. We had an easy afternoon ride ahead, through tea plantations and beside the ever present hills that we will be driving through very soon. The border of Bhutan is not far away – where the real adventure begins.
q
A ride of 120 km took us along relatively busy roads to the border. We left India from an office which you could easily miss and drive through the main gate into Bhutan. It’s an instant change of surroundings – the foothills are right in front of us now, the local people wear the traditional clothing, the architecture is different, and there are actual rules on the road. Yes rules! We completed the formalities of entry and head to the temple to complete three laps to give us luck for the journey ahead and hitting the mountains tomorrow. Such a good feeling to be in Bhutan!
q

The following day there was a mist hanging in the air. As we made our way up the endless winding roads in our rain gear – a welcome change after the hot riding in India – the architecture, atmosphere and mystery of Bhutan began to reveal

Steep cliff top edges gave way to wide open valleys as we get nearer to Paro which was our destination for the day.
Welcome to the kingdom of Bhutan!
q

After a toasty night’s sleep, we awoke early in anticipation of the long walk ahead to Tigers Nest. This is one of Bhutan’s most famous sights, with an amazing structure clinging to the steep rock face. It was a short ride to get to the base of the climb and from there we take our time to get to the top. We’re completely in awe of the view and even had a guided tour of the beautiful monastery. We got down in time for lunch among the pine trees – a picnic of sorts – before heading into Paro for a wander and some shopping. Asparagus was absolutely everywhere along with dried apple, pears and the hardest cheese we have ever

tasted! From Paro the road was stunning, following valley rivers to Thimpu the capital city and passing ancient bridges through high pine clad Himalayan foothills. On arrival in Thimpu we had a little time to explore and found a local archery range using bow and arrows to hit a small target well over 100 m away! We also found a football pitch with the finest main stand. We hit the bar for a well earned drink.q

After completing some formalities in Thimpu in the morning, we refuelled and rode round the town to get a view of the Kings Palace and Parliament. Then we head to the hills over a 3,150m pass with 108 stupas on the top and far reaching views down the valley. It wasn’t completely clear so the snow capped peaks remained elusive, shrouded in clouds. The road down from there was awesome. Sweeping corners winding through the Royal Botanical Forest – a national park of pristine woods all the way down to the rivers at the bottom at 1,100 m. We arrived at Punakha, rode through the small town and were met with the magical site of the Dzong or fortress.

Framed by lilac lowering Jacaranda trees it is a sight that takes your breath away. We crossed the ancient cantilevered bridge and soaked up the atmosphere of this place, with monks chanting, adorned by paintings in every colour imaginable. We were close to our hotel from here – what a superb day! q
We left Punakha early as we had a long day ahead. A quick refuel in the first town then on the road. For the first 35km the roads are good, but they deteriorated to gravelly occasionally muddy with some potholes thrown in for good measure. The road is beautiful revealing snow capped peaks and pristine mountain villages along the way up to the pass. The Chief Abbot, who holds as much power as the King, passed us in a convoy of 4×4’s. Later we visited a Nepalese style Stupa or Chorten and had lunch in a restaurant painted with phalluses, before we arrived in Trongsa, dominated by a huge Dzong and watchtower perched over a gorge. The bikes took a bit of a battering on the tough roads, but all good. It gave our crew a bit of work to do!

A short ride the following day over some bumpy roads led us to the Bumthang valley. It was like riding through Switzerland with stunning local architecture and picture perfect villages. The local kids came out to see what was going on as we rode through. The road was a single track mountain road through pine forests – great riding after the previous couple of days. We arrived in our home-stay for a luxurious lunch before heading to the hot stone baths for a soak in boiling hot water infused with the wormwood that grows everywhere. After we’d warmed up, we hit the local brewery Red Panda and added the local cheese to our Bhutanese wine (called happiness). The perfect end to the day.

q
The next day we rode through the mountains over the highest pass of the trip 3750 m. From Bumthang we had gone down into a steep gorge before climbing to the pass and as we got higher the clouds come in so visibility was poor. The forest is primeval here with pink and red rhododendrons. There were lots of sheer 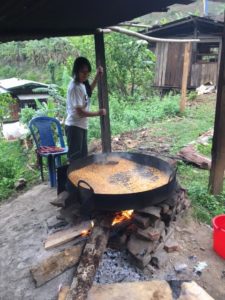 drops as we went through the clouds! There was one bike issue but eventually we got it sorted and carried on, stopping for lunch just before the rain started – good timing! After a feed we kept riding down, while the clouds got even denser the lower we got and the the forest turned to jungle. From up high we end up in a lush, sunny valley which cultivated lots of corn and at around 750 m wild marijuana lined the roads. What an amazing and eerie ride. The last 20 km take is to our hotel in Mongar.

q
We spent the following two nights in Tashigang so we took an easy ride up a nearby valley. The day started very wet so we hung around until it cleared. We head to a monastery where they were performing a chant for a funeral. It sounded amazing and the inside was beautifully decorated. We climbed further up the valley and had tea in a farmhouse with superb views down the valley. Few tourists make it this far east and it remains beautifully unspoiled. On the way back we had lunch in Tashigang which is a charming little village before we wandered down to watch some traditional archery. More drinks follow later, keeping up the trend!
q

Our final ride in Bhutan was just beautiful. The sky was cloudless as we set out from Tashigang. Straight away we climbed up great roads and there they were – a line of snow capped peaks on the horizon – what an incredible sight. Those peaks are the highest unclimbed peaks on the planet and it felt like the roof of the world. We found a vantage point on a new runway for the airport that is being built and soaked up the view. The roads were perfect for some time, with sweeping bends built for riding. We hit a last stretch of rough road with precipitous drops and a quick dip into the clouds. We were forever descending to the plains which start at the border and stretch into the distance. We dealt with all the formalities after we reach the border town of Samdrup Jongkhar.

Farewell to the wonderful Bhutan.

Back in India, the number of people on the road instantly grew, the noise increased, horns were used by all, cows and goats littered the roads and chaos prevailed. A final burn along a dual carriage way took us into Guwahati – the capital of Assam. The occasional bus driving the wrong way up the highway was a real welcome back to India and a reminder to keep our wits about us! Guwahati lies on the banks of the great Brahmaputra river and so we took a boat down the river at sunset, with the full moon almost upon us. We ended an incredible tour with dinner at a local hotspot before flying back to Delhi.

An amazing tour with a brilliant team!

Fill the form below to reserve your seat

Request our Free Brochure and learn more about our motorcycle adventures

Just about the only other vehicles we pass on the

Just after you stacked the bike wearing the remain

The Royal Enfield Bullet more than a match for Mon

Love this image could have come straight out of ea

Deep in the jungle....the interior of Sri Lanka...

This website uses cookies to improve your experience while you navigate through the website. Out of these, the cookies that are categorized as necessary are stored on your browser as they are essential for the working of basic functionalities of the website. We also use third-party cookies that help us analyze and understand how you use this website. These cookies will be stored in your browser only with your consent. You also have the option to opt-out of these cookies. But opting out of some of these cookies may affect your browsing experience.
Necessary Always Enabled

Any cookies that may not be particularly necessary for the website to function and is used specifically to collect user personal data via analytics, ads, other embedded contents are termed as non-necessary cookies. It is mandatory to procure user consent prior to running these cookies on your website.